Aging is an unrelenting and inevitable fact, but it is not equivalent to sickness.

By means of an early diagnosis and an anti-aging therapy, disability and disablement can be avoided, i.e. it is possible to extend and improve lifetime quality.

An improved life quality , diets and development of preventive medicine make it possible that lifetime may achieve an average of 85 years.

“Senior” population will increase and an important number of centenarian persons will live the third millennium. Good health is not a privilege of young generations but also of grown-up and elderly people.

Recent studies on experimental and clinical gerontology demonstrate that due to genetic or enviromental reasons, some persons become prematurely old in some of their physiological systems.

Neurosensorial aging starts as from 40 years on. The first fact for becoming fully aware of this is the imminent need of wearing glasses for reading -presbyopia-.

Together with reducing visual acuteness, it also appears a slight loss in hearing very high tones -presbyacousia-. Gradually, we start noticing some unsteadiness or fear to keep moving -presbyataxia-. This slow deterioration or damage of our sensorial organs means that our brain is becoming old due to age.

The point is that in our brain, in the course of the years, very fine modifications are produced affecting its biochemical morphology.

An early diagnosis and therapy of this regular neurobiological declination enable us to compensate the involutions which are produced in the brain, such as:

It is observed that this disease has a frequency between 3 and 10% among persons older than 65 years. It is an epidemic which is coming closer, representing the third health problem in developed countries.

Together with modifications in life expectations, it has been developed in recent years special methods of early diagnosis and treatment of those diseases affecting organs of senses, -neurosensorial affections- and the brain.

Development of computing and electronics applied to medicine has introduced non invading diagnose methods for checking and monitoring neuronal functions.

German Data Bank results and our own Data Bank of Otoophtalmological Neurophysiology, indicate that more than 50% of the population register, as from 40 years old, cerebral circulatory variations, which in most of the cases are the origin of the first changes of the biochemistry of cerebral aging.

“Neurosensorial Anti-age” medicine selectively approaches these variations, carrying out studies on the cerebral circulatory dynamics and on the electrical activity of the brain.

Bloodless and non invading methods allow us to study in depth each one of the intracranial arteries. Vascular flow variations can be dynamically measured and by means of different computing methods very important cerebral circulatory parameters can be evaluated, such as: speed, flow and direction of the bloodstream, peripheral resistence and stenosis degree (occlusion) of the different intracerebral arteries. 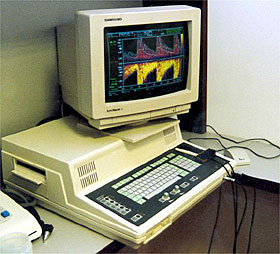 Neuronal biochemical changes which go together with cerebral deterioration turn into variations of the neurone electrical activity. These neuronal bioelectrical changes or changes of "tonus" could be early measured by non invading and bloodless methods.

As per results obtained from functional examinations, the "neurosensorial anti-age" treatment should be established in four directions.