Through our experience, we have daily observed some patients who presented a previous diagnose of Menière Disease.

The Neurootological Anamnesis highly denotes in these patients, not only the traditional trilogy –vertigo, tinnitus, hypoacousia-, but being it very frequently joined to some other symptoms, such as headache or migraine.

The combination of vertigo and migraine indicates the possibility of being in the presence of a central pathology of vascular etiology.

As first and main step, it should be avoided any confusion in diagnosis and therapy, i.e. treating every patient presenting the very well known Menière trilogy as a simple lesion of the inner ear, without taking into account that the equilibrium system is something more complicated than a semicircular canal, where it does not only exist a ear and an auditive nerve, disregarding organs and most important vias as: brainstem, cerebelum, thalamus-cortical projection via, cerebelum-oculomotor via, cortical and cognitive vestibular areas, etc.

Any alteration in the circulatory haemodynamics and in neurotransmission in this complex of nucleus and vias will produce a Menière-like Syndrome, together with or without any other symptoms.

At last, a proper diagnosis of these affections enables us to establish a proper therapy towards three directions:

Advances in basic research in neurosciences and the introduction of new non-invasive techniques, that make possible the detection of weak signals of the brain, improving diagnosis and treatment of the Vestibular Migraine

A comparative study using Low Resolution Brain Electric Tomography (LORETA) in 120 patients who have consulted on vertigo and migraine and the results were compared vs. 390 patients from our Data Bank. (J. Bergmann, G. Bertora – 2004).

The Brain Electric Activity Mapping in the patients consulting on vertigo and dizziness joined to migraine presents in Delta Band in 2.25 Hz frequency, a combined form between the group of patients with Menière Disease and migraine exclusively. Dipoles are placed in Brodmann areas 25 and 31.

These areas bilaterally comprise the Medial Frontal Gyrus and the Parietal Lobe with left prevalence. 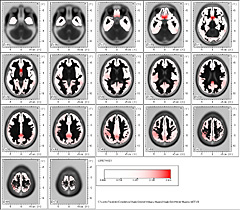 These Brodmann areas are located in the Medial Frontal Gyrus and in the Limbic Lobe and Anterior Cingulate with left prevalence. 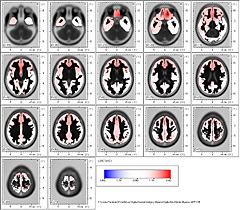 In ßeta 2 Band in 19.50 Hz frequency, the dipole is observed placed in Brodmann areas 7 and 3.

These areas comprise both Parietal lobe. 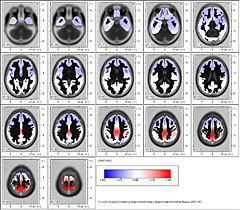 The vestibular migraine has an important cortical representation in:

Study of the temporal distribution which the brain electrical tomography makes possible, opens a new field in Vertigo and Migraine.

The Vertigo Syndromes together with migraine are typical signs of vestibular headaches, affecting the temporo-parietal junction and the prefrontal areas.

The regular Menière Syndrome (vertigo-hypoacusis-tinnitus) has an important cortical representation in frontal areas Brodmann 25, Limbic Lobe and the Parahippocampal Gyrus.

Through our work published in 2001 Vertigo and Migraine using as a study method the Brain Electrical Activity Mapping, we have met the following conclusions:

In Brain Electrical Activity Mapping, we observe a disorder of the electrical activity in paracentral areas C3 and C4 in patients with vertigo-migraine but not in the vertigo group of patients.

It is as observing the earth from a satellite and try to guess what is going on under the surface. Through LORETA, it is not only possible to study spatial distribution but also knowing the different cerebral activity areas in deep zones.

The frontalization present in all these patients and the involvement of the limbic lobe and prefrontal lobe is extensively demonstrated in Menière or Vestibular Migraine ( Migraine and Menière Syndrome).