Through our Data Banks, we have been observing lately an exponential growth of patients consulting on neurootological and neurosensorial disorders secondary to cervicocephalic trauma due to traffic accidents, to such an extent that we could nowadays talk about a disease of modern civilization or contemporary disease.

During years 1978 through 1980, we have carried out a study in Germany on the incidence of these lesions, particularly caused by massive collisions on highways and by ski falls.

Statistics at that moment showed that 11% of patients have consulted on craniocephalic trauma background, this figure went up to 28% in recent years.

The name or denomination Whiplash Injury derives from the etiopathogenic description of the sudden sharp whipping movement of the head and neck, produced at the moment of a traffic accident, particularly subsequent to collisions from the rear, head-on or side collisions.

In the case of a head-on collision, a forward displacement of the body is produced as a result of the inertia (weight of the body x speed), provoking tension upon the safety belt together with a neck hyperflexion followed by an hyperextension of it, thus producing "the whiplash".

In the case of a collision from the rear, the mechanism is inverted, first hyperextension followed by hyperflexion of the neck.

The U.S. National Highway Traffic Safety Administration has reported during 1995 on 5.5 million of American people involved in a traffic accident. Subsequent studies showed that 53% of them have suffered from Whiplash Injury.

Studies carried out in different countries on the speed from which this phenomenon is produced, show that it is feasible as from 20 Km/h on.

The lesion biomechanism is directly related to the accelerating power applied, in such a way that 6 different phases could be observed.

As per the lesion topography, the cervicocephalic trauma can be classified as follows: 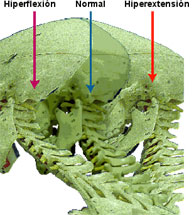 Cervical Syndrome: Together with headaches, painful nape, restricted movements and muscular contractures, in an extreme case, it could produce torticolis.

Cervico-Brachial Syndrome: To the above mentioned symptoms, it should be added sensitive disorders, loss of strength, paresthesias on shoulder and arm stretching towards the hand. This syndrome can be unilateral or bilateral.

Cervico-medullar Syndrome: Lesions on the spinal cord are produced, which in line with its seriousness could turn into a commotion with temporary tetraparesis or, in the case of permanent section, they lead to tetraplegia.

In 80% of the cases there is a recovery of the cervicocephalic trauma, produced in different ways, from a few days of evolution up to two years.

In the remaining 20%, the symptomatology is kept going as cervical, cervico-brachial, cervico-medullar or cervico-encephalic pains.

If, after 6 weeks as from the date of the accident, the disorders are still present, it should be presumed that due to Whiplash Syndrome, internal lesions in the medulla or in the brain were produced.

In these cases, diagnose exams should be carried out hastily for an early identification of the cause of the lesion and its treatment, in order to avoid chronicity of these lesions and to relieve the patient from the psychical upset which generally always comes together, particularly from the disablement that these symptoms may produce.

Using the Brain Electric Tomography (LORETA) – Pascual Marqui et all – and special statistical methods as the SNPM – Nichols and Holmes – it is possible to determine which are the most affected areas and subsequently the cybernetic mechanism involved in the trauma. (Bertora-Bergman, 2008) 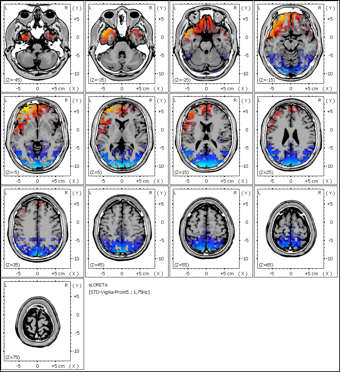 The highest activity areas of Delta and Theta type are located in all the patients in frontal areas, BA 10 and BA 11.
The second phenomenon observed in every patient is the irritation of the temporal and parietal areas prevailing towards left side BA 42, 22 and 43, with the appearance of Beta 1 and Beta 2 rhythms.