Neurootological affections could be caused by certain lesions which could be proved by means of radiological studies, cerebral computer tomography (CT) or nuclear magnetic resonance (NMR), thus being the cerebral lesion easily observed. In these cases, lesions are considered as anatomical or “Disturbances of the Hardware”.

But, there are lot of lesions which are not other than cybernetics affections derived from biochemical alterations which modify neuronal activity and the neuronal circuits. These affections do not produce morphological changes in tissues. These are considered as functional lesions called “Disturbances of the Software”.

As per results shown by our Data Bank, among 15,833 patients presenting neurootological diseases, who have been examined during the period 1981/2000, the reasons of their consultation have been:


Background capable of producing the aformentioned symptoms shown by the patients, were:

From the figures shown on the above chart it results that more than 40% of the population presents a cardiocirculatory background, with particular reference to blood pressure alterations.

The practioner is in charge of diagnosis and therapy of cardiovascular disorders.

In view that 42% of our patients consult on headaches or migraines and ­all the other symptoms hereby described­ are referred to the cerebral area, cerebral dynamic bloodflow investigation is strictly studied by us in all our patients. 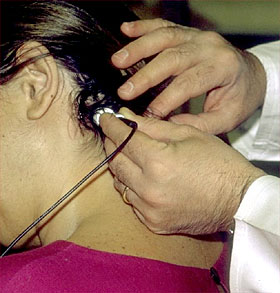 Checking of the vertebral artery by means of USD

Through studies of Brain circulatory dynamics we could proved that 40% of patients having a circulatory background represent 75% of them. Therefore, this indicates that 35% of patients who do not show variations in their general blood pressure, suffer with proved brain circulatory alterations. Through this bloodless method future cerebrovascular accidents (CVA) could be foreseen or avoided.