How do hearing alterations become evident?

There are two symptoms which are characteristic of certain alterations in the auditory pathway: hipoacusis or hearing loss and the tinnitus or buzzing in the ears.

None of them are considered a disease, but only a symptom which could be due to several affections or disorders, though many times, in view of their importance, they could become the main points of certain diseases.

Transmission hipoacusis are those affecting the transmission system of the middle or external ear.

Perception hipoacusis are produced in the sensorial organ, i.e. in the inner ear (cochlea) or in those pathways in charge of leading sounds up to the brain. 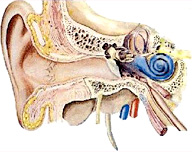 Due to a permanent crossing in the auditory pathway, disorders of the brainstem and cortex do not cause hearing loss, but they could unsettle this pathway up to such an extent that it could turn very difficult to understand the meaning and origin of the sound message.

Auditory perception is also interesting from the neurootological viewpoint, that is to say, producing the signal at cortical level. Certain alteration in integrating auditory signals in the brain together with some other sensorial afferent pathways, as for example visual pathways, could cause trouble in training periods and in memory.

Tinnitus or buzzing in the ears are, in most of the cases, the result of neuronal biochemical alterations, which produce irritation or lesion in the auditory pathway that are represented in a subjective way by the aforementioned symptoms.