During last half century, medical developments have accelerated an increase in life expectation at a worldwide level.

This advance in life expectation has determined that some pathologies considered of low influence in the past, have turned today as top priorities in public health.
Among them cognitive disorders and pathologies (loss of concentration and memory) are the most important , being those of vascular etiology which demonstrate an exponential growth rate as from 65 years old ahead.

Cognitive Auditory Evoked Potentials – P300 are carried out as a routine at our Laboratory – Bergmann-Bertora – to those patients consulting on loss of memory and concentration difficulty, sometime these symptoms could appear together with dizziness and tinnitus.

For studying Cognitive Potentials – P300, we evaluate the waves corresponding to responses of auditory primary areas P2 – N2 and mainly P300 Wave corresponding to cognitive areas and of temporo-parieto-occipital association.

We analyze latency time, amplitude variations and temporospatial distribution of it. 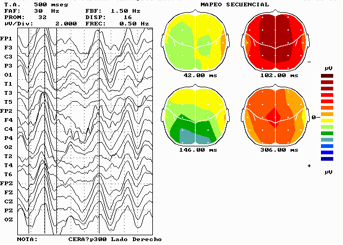 We have investigated a group of patients showing cognitive disorders, concentration decrease and loss of memory whose age was between 50 and 80 years old.
Through studies of Brain Magnetic Resonance it was observed signs of cortical brain atrophy in 24% of the cases at the beginning, and in 25% brain vascular lesions.

It was observed a delay in latency time of P300 Wave prevailing on left stimulations, an amplitude decrease and spatial variations in the formation of the cognitive potential depending on the pathology.

In those patients showing cortical atrophies in the RMN the temporospatial distribution of the potential prevails in frontal areas. 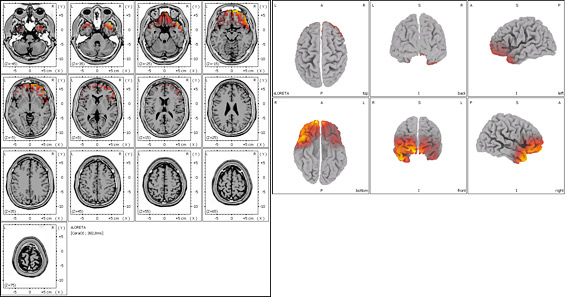 In vascular pathologies, temporospatial distribution of the potential prevails on temporoparietal areas. 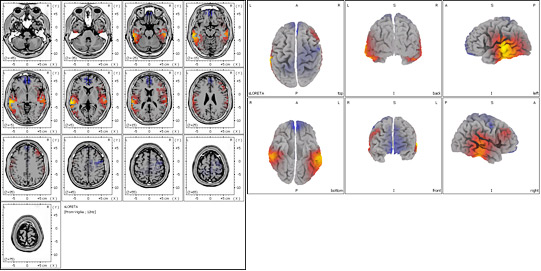 We have observed in these patients, through several studies that different from adult ones, no pathological variations are produced latency and amplitude of the potential, being very evident the pathology in projecting P300 potential, probably due to the brain maturity deficits showed in this sort of patients.
This study allows us to establish a therapy directed with some essential neurotransmitters for obtaining the so called upper brain functions, i.e. language, praxias and spatial organization.