The vascular system and its influence under stimuli of the autonomic or neurovegetative nervous system play an extremely important role, not only in Neurootology, but also in the origin of severe headache or migraine.

From our Data Bank analysis, it becomes evident that 57,89% of neurootological patients present haemodynamical alterations in capillaries, 29,57% corresponding to hypertension phenomena or spasticity and 28,32% to hypotension phenomena or capillary dilations.

On top of this, 42% of patients consult on severe headaches, migraine or cephaleas, associate or not to other neurootological symptoms.

On those patients showing migraine or severe headaches the study on cerebral haemodynamics is strictly applied by means of USD-Transcranial and of the USD-Extracranial,thus issuing a diagnosis on the sort and features of cerebral vascular disorders.

As per the results obtained through studies on cerebral haemodynamics, it has been found that our patients suffer from:

On patients below 40 years old, there is an equal distribution between vasospastic and vasodilatic forms, whilst on patients over 60 years old vasospastic forms prevail in 80% of the studies. 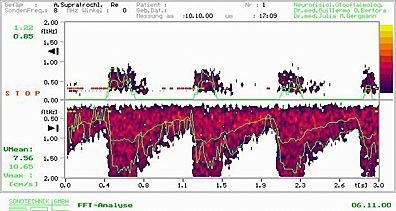 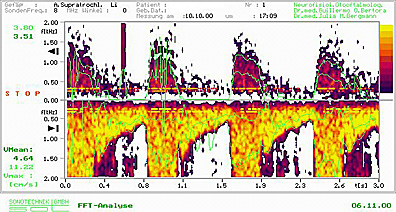 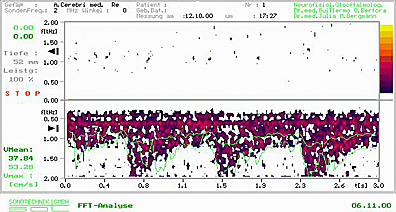 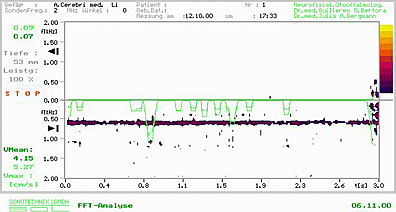 22 year old patient suffering from vasomotor migraine under dilatational form. In the Brain Electric Tomography it is observed in yellow/red a hyperactivity focus in frontal lobe and limbic left , in blue hypoactivity brain areas. This is a typical depolarization process which could be objectified in headache and migraine situations.

With the vascular changes typical of headaches and migraines, depolarization or irritation areas are produced at cerebral level which should be evaluated to solve this pathology in a global way.

Migraine treatment should be: