The study of dizziness or vertigo consists in the application of stimuli on each one of the peripherical sensors ­proprioceptive, vestibular and visual­ which are involved in the equilibrium process in order to be able to obtain an answer from the central computer or brain which may be quantitatively and graphically illustrated.

Interaction of the three systems 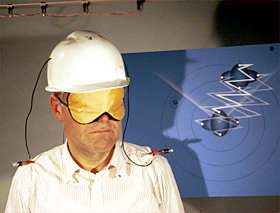 Craniocorpography - CCG: Objectified and quantified by means of the vestibulospinal system video (Romberg's and Unterberger's tests). 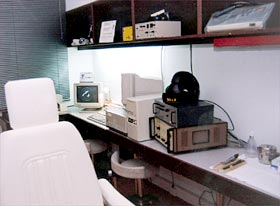 Equipments for neurophysiological measuring used in our laboratories.

Vestibulo-thalamocortical projections, vestibulocortical answers as well as their secondary areas could also be illustrated in a chart from a quantitative and graphical point of view. 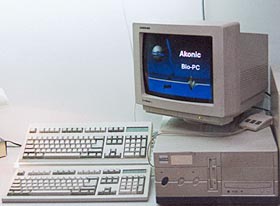 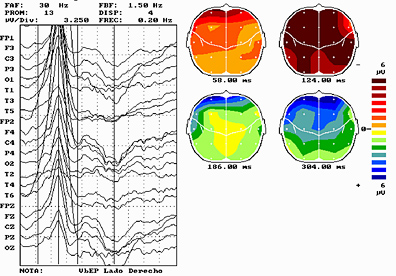 Mapping of Vestibular Evoked Potentials -VbEP-. This is one of the most improved and sensible methods to differentiate peripheral and central vestibular lesions.

Parameters and patterns are obtained from these studies which make possible to establish a difference between a regular situation from those which are not, to differentiate by means of the answers, depressive states from those of release, to make a proper topographical localization of the injury for furtherly establish the suitable therapy in line with the affected areas.

Previous to this neurophysiological knowledge, it was estimated that vertigo was produced by some trouble derived from the spine or from the ear, being this one wrongly known as Menière disease.

Otherwise, in those cases when a reliable reason was very difficult to be proved, the vertigo has generally been considered of psycological origin, connecting the patient with psychiatric areas. Thus, on evaluating vertigo from this standpoint, patients start perambulating from one consulting room to another trying to find out an answer to their disease.