Which is the reason why tinnitus is produced?

Our tinnitus physiopathological schedule – Otoophthalmological Neurophysiology – (Bergmann-Bertora 2008), obtained after several years of experiencing and of pharmacological working enables us to deduce that in 80% of the cases, the initial release for producing tinnitus is a cochlear type pathology or derived from inner ear. Thus, the unbalance between information of afferent and efferent fibers between the cochlea and the cochlear dorsal nucleus (CDN), releases the irritation of this nucleus.

Once the irritation of this CDN is produced, the cochlear pathology or of the inner ear moves to a secondary state, as it has been demonstrated by the different studies where cochlear or ear destruction has been produced by gentamicine prescription or by surgery of the auditory nerve, by which far from obtaining successful results on tinnitus, on the contrary this pathology has been increased.

In effect, tinnitus is a reflex arc of central origin. Under normal conditions of upper circuits of cortical or cerebral control, tinnitus is modulated by the cortical-thalamus-striated-cortico loop. Then, tinnitus goes unnoticed for the patient causing no alteration in daily lifestyle, referring to tinnitus as hearing it only in silence and producing no difficult for a quiet sleeping.

In our model, thalamus works as a selective filter for the information reaching the brain. Any modification of this thalamus function provokes a sensorial overcharge, blocking the respective brain areas and thus appearing tinnitus.

The thalamus filter control is under the influence of the cortical-thalamus-striated-cortico loop.
Auditory information reaches the thalamus, therefrom it is projected towards the brain primary auditory areas BA41 and 42.
Once the information has been elaborated, the via projects towards associated auditory areas BA21 and 22, for finally projecting towards the associated areas located at the prefrontal cortex BA 47, 10, 11.

The prefrontal area projects towards subcortical emotional areas, particularly towards the striated one, including the amigdala and the accumbens nucleus. These areas are in charge of the thalamus control and of closing this filter. (Red circuit in the drawing) 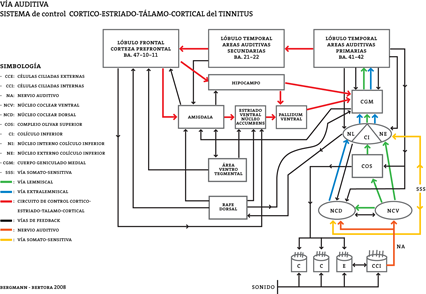 Chart of the auditory via and of the cortical-thalamus-striated-cortico modulation via.

When an alteration is produced in this circuit, the patient listens the tinnitus permanently and oversized turning lifestyle intolerable.

Also, the participation of the frontal cerebral areas, the amigdala and ventral striate, which are emotional cerebral areas, explain many of the added symptoms showed by the patient suffering from tinnitus, as depression, anxiety and panic attack.