As per our experience, the vascular system and its influence under sympathetic and parasympathetic stimulations plays an essential role in neurophysiology of equilibrium.

Every modification of arterial calibre, wherever it may be located at peripherical or central level, depending on sympathetic system may produce nutritional troubles at celular level with alterations in their functions.

Menière, in his thesis published in 1861, describing the Syndrome or “Menière's Disease” has already mentioned these vascular alterations and has already connected them, in some cases, with migraine pathologies.

These facts have been our main reason to investigate, as from 1983, cerebral haemodynamics changes in patients with presumed diagnose of “Menière's Disease or Syndrome”, being our first edition “Über die Vaskuläre Migräne unter dem Ercheinungbild eine Menière Syndrome”.

At our Otoophtalmological Neurophysiology Data Bank with 7800 patients, 51% consult on a Menière kind syndrome joined to neurovegetative symptoms. In this group, 54% show migraine or headache background while 10% present diplopia or double vision.

The releasing mechanism consists, in 55,8% of the cases, of postural modifications and in 31.1% of kinetosys.

These patients have been under investigation by means of:

General statistics of the tests show the following results:

92% of patients showing compatible symptomatology with Menière Syndrome presented haemodynamic pathology which could be objectified.

75.22% of patients showing compatible symptomatology with a Menière present central vestibular lesions or dysfunctions which can be qualitatively and quantitavely objectified by means of the aforementioned numerous neurophysiological measuring methods.

As first and main step, it should be avoided any confusion in diagnosis and therapy, i.e. treating every patient presenting the very well known Menière trilogy (vertigo, hypoacousia, tinnitus) as a simple lesion of the inner ear without taking into account that the equilibrium system is something more complicated than a semicircular canal, where it does not only exist a ear and an auditive nerve, disregarding organs and most important vias as: brainstem, cerebelum, thalamus-cortical projection via, cerebelum-oculomotor via, cortical and cognitive vestibular areas, etc. Any alteration in neurotransmission in this complex of nucleus and vias will produce a Menière like Syndrome, together with or without any other symptoms.

It should be bore in mind that only in 13% of the cases, we can be in front of a true Menière Disease or Hydrops on which the specific treatment of it will suceed.

Advances in basic research in neurosciences and the introduction of new non-invasive techniques, that make possible the detection of weak signals of the brain, improving diagnosis and treatment of the Menière Syndrome.

For instance, the cortex can be modeled as a collection of volume elements of 2394 voxels in the digitized Talairach atlas provided by the Brain Imaging Center, Montreal Neurological Institute.

In 2004, we carried out at Otoneuroohtalmological Neurophisiology, Buenos Aires, Argentina – Dr. med. G. Bertora and Dr. med. J. Bergmann – a comparative study using Low Resolution Brain Electric Tomography (LORETA) among 85 patients who have consulted on: Menière Syndrome and the results were compared vs. 390 patients from our Data Bank.

In Menière Syndrome we could see Delta low frequency band, in 1.75 Hz. An outstanding frontalization is observed comprising Brodmann areas 25, 38 and 10.

In 3D representation and in Talairach Atlas, it is observed that they bilaterally comprise the Medial Frontal Gyrus. 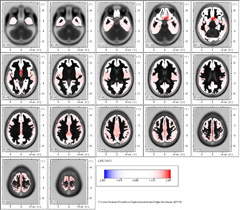 In ßeta 1 Band in 13.25 Hz frequency, frontalization remains in these patients comprising Brodmann areas 13, 47 and 45.

In Talairach Atlas and in 3D representation, it is observed the left prevalence of Frontal Inferior Lobe, Insula and Sublobar region. 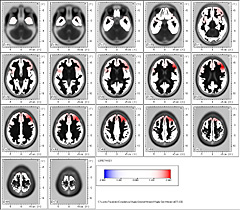 In ßeta 2 Band in 21.75 Hz frequency the exclusive location of dipole in Brodmann area 36 is highly significant.

Which comprises the Limbic Lobe and the Parahippocampal gyrus left 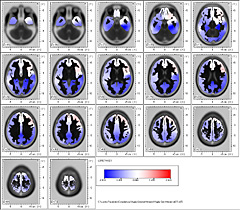 The Menière Syndrome – vertigo, hypoacusis, tinnitus – has an important cortical representation in: 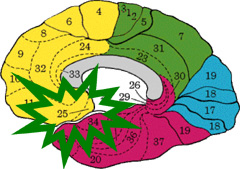 Our investigation (Bergmann – Bertora, 2004) capable of proving the fact that the Brodmann area 25, subgenual area and parahypocampal gyrus are involved in the Menière Syndrome has not been described yet in international bibliography.

This study allows us to open the black box of the Menière Syndrome.

The reason why the exclusive treatment of the peripheral organ and / or of the vestibular and auditory dysfunction does not lead to the whole and absolute compensation of the affection in many patients, is due to the fact that the prefrontal cerebral dysfunctions which always maintain latent this pathology are not being treated.

The frontalization present in all these patients and the involvement of the limbic lobe and prefrontal lobe is extensively demonstrated in Menière. But, there is a highly significant interindividual variation where different types of cerebral rhythms can be combined, which definitely indicate a hypofunction or hyperfunction of some neurotransmitters.